Twilight of the Anthropocene Idols 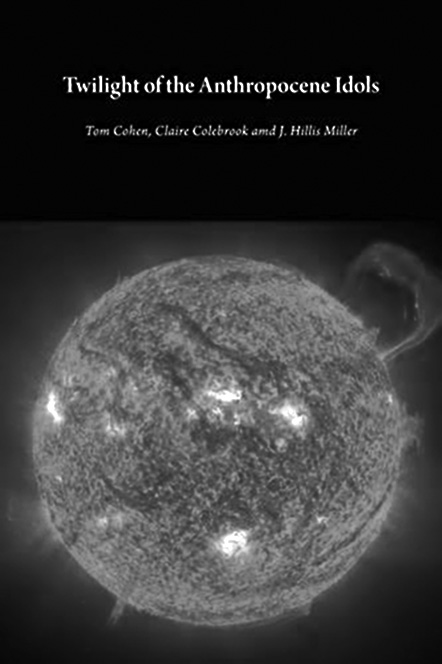 Ever since being mentioned by Dutch chemist Paul J. Crutzen at a global change conference in 2000, the concept has been pervasive: we are living in the Anthropocene, a geological epoch marked by global ecological change caused by humans.1 An article Crutzen wrote with American biologist Eugène Stoermer further elucidated the intertwined history of human beings and planet Earth from the late eighteenth century invention of the steam engine onward.2 The term Anthropocene has been met with divisive response, however – be it in the art world or otherwise. Twilight of the Anthropocene Idols (2016) addresses this reaction by asking: What is implied in the ‘anthropos’ as single agent of biogeophysical destruction? What narrative binds humans to ecocidal charges? Taking this notion to task is timely, especially given the authors’ argument that the ‘dazzling brilliance of the Anthropocene idea’ can only be seen clearly in its waning light.

The book consists of three parts, each written by one of the authors. Although they delve into slightly different aspects of the Anthropocene – Cohen argues for a cynical attitude that questions whether climate change should be ascribed to anthropos alone, especially given his observation more generally that climate change be a ‘stand-in term for a radical materiality that eluded the Western epistemological systems and “dialectical materialist” offspring’; Colebrook is interested in the political possibilities inherent in the Anthropocene, reading the human as a necessary political animal now that geological tipping points have been passed and ‘we’ humans as a species, have to act as one; and Hillis Miller points out other current social issues (xenophobia, global recession, digital revolution) that are often entwined with the concept, emphasizing the reductive implications of the term – all agree that the rhetoric subtending the Anthropocene should be considered closely. Taking up a Nietzschean approach to living in times of war with the title a tribute to Nietzsche’s Twilight of the Idols or How to Philosophize with a Hammer (1888), they sketch a cheerful path to convalescence from inward looking attitudes, seriousness and reigning false ‘truths’. Like Nietzsche they sound out idols, ‘touching them with a hammer as with a tuning fork’ in order to distinguish values we can rely on from those that are puffed-up and hollow, effectively dismantling the term Anthropocene. The preface lays out that ecocide requires ‘epistemo-political mutations that correspond to the temporalities of terrestrial mutation’: that is, how can we think through an era we call ‘our own’ in light of the multiple shifts marking the Earth’s systems?

The authors adopt a similar approach to their earlier collaborative publication Theory and the Disappearing Future: On de Man, on Benjamin (2012). They take recourse to literary theorist Paul de Man’s observations on how rhetoric (tropes) interferes with logic helping both to exacerbate ‘bad times’ and to enable us to manage during them. Their analyses are steeped in deconstructive readings of rhetorical figures, in this case the many tropes that find a basis in anthropomorphism (like prosopopeia, speaking in another’s voice), which is also the basis of the Anthropocene. ‘Anthropos’ has Greek origins and is an ‘ideological lie’ since it doesn’t exist: what we call ‘man’ is a construction. Colebrook holds we need to focus not on this lie, but on the composition of the human: ‘With composition implying malleability and a future that might be otherwise.’ This is reading politically, signalling the human’s orientation towards others that he / she is not. Political reading makes do with Anthropos as the single agent of global destruction, eliminating the possibility to imagine a future world for us but including that which is inhuman as well. Colebrook’s proposition goes against what the term Anthropocene suggests, singling out ‘anthropos’ in an exclusionary way fails to perceive the human in relation to someone-something else.

While Colebrook brings up the geological sublime of the Anthropocene as a challenge to thought, since the sublime represents a materiality (unknown, infinite) not yet humanized, Cohen gives pause to look into a necessary act of ‘defacement’ as a means of unveiling the imposition of Anthropos. Whereas the word Anthropos creates a privileged position for the human (like its derivative ‘I’ or ‘we’), the strategy of defacement generates a ‘phantom or echo-positionality for what remains before the contract of “face” at all.’ Defacement acknowledges ‘face’ as formalized, assumed, socialized. ‘Face,’ the mask par excellence of ‘human’ is reckoned with in referring to that other arche-cynic, Diogenes, and his dismissal of ‘we’ as a premise. The position of defacement or privation is presented as curative by Cohen, opening up alternative histories within an ‘übercanonization’ of ‘face’ and Anthropos today. ‘We’ are witnessing an ‘epidemic of facelessness’, counter-intuitively so, composed of virtual communications (selfies, Facebook) that lack correspondence with a world called real. The present we think we are talking about is actually artificial.

Twilight of the Anthropocene Idols contextualizes the Anthropocene idea in being mindful of the multiple narratives integrated within it. Their reading dismantles ideologies and resists mechanical and all too logical meanings embedded in the language used to talk about the Anthropocene. If we read carefully, Cohen, Colebrook and Hillis Miller argue that prevailing cognitive patterns bound up with ‘our’ humanized language can be reset enabling unpredictable, dehumanized futures to emerge that correlate with the demands of ecocidal times. In order to think through and act upon the world and the matters that concern us discipline is needed in two senses, Colebrook proposes: disciplines as a ‘knowledge-composing, shared and adaptable practices that allow a common world to come into being’; but discipline is also what is required to confront the problem of scale. The volume pleads for interdisciplinarity in order to confront a changed ecological order that integrates the human species with earth system sciences.

1. Meeting of the Scientific Committee of the International Geosphere-Biosphere Programma, Cuernavaca, Mexico, February 2000; see Andrew C. Revkin, ‘An Anthropocene Journey,’ The Anthropocene Magazine, October 2016, www.anthropocenemagazine.org. Regarding the influence of the concept I am referring to Timothy Morton, The Ecological Thought (Cambridge, Massachusetts: Harvard University Press, 2010).

Ilse van Rijn is a critic and art historian. She is working on her doctoral research, studying ‘autonomously produced artists’ writings: their operative force, status and role,’ collaboratively supported by the Gerrit Rietveld Academy, the Jan van Eyck Academy and the University of Amsterdam / ASCA. She was previously a researcher and adviser at the Jan van Eyck Academy. Currently, she teaches in the Rietveld department of ‘image & language.’