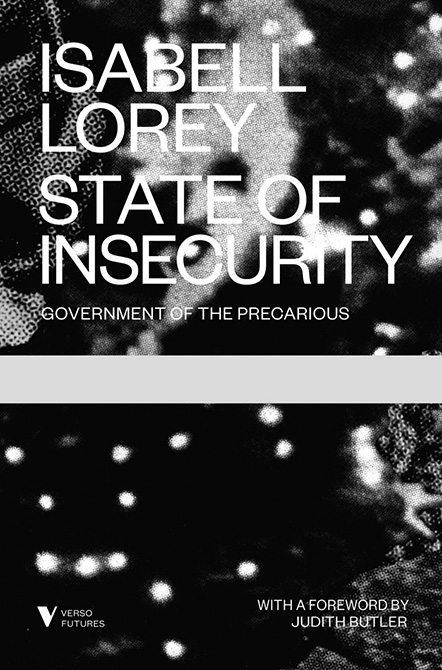 Over the past decade and primarily in Europe, precarisation – denoting an existence without security in which one is exploited – has not only extended further into the field of cultural production but also into the whole of our existence, that is, our bodies and modes of subjectivation.1 In her essay “Constituent Immunisation: Paths Towards the Commons” included in Open!’s Commonist Aesthetics series, political theorist Isabell Lorey picks up on how the modern process of “biopolitical immunisation” employs precarisation to perpetuate domination. Crucial to her analysis is hence the unfolding of the logics of biopolitical immunisation in the frame of security discourses. These discourses, Lorey maintains, enhance the feeling of insecurity by conjuring the figure of the “dangerous Other” from whom we must be protected. Interestingly, however, her arguments go beyond a paternalistic analysis of domination. She sees precarisation not as a threat to be immunised from, but rather as a subversive form of radical politics that could serve as a platform for resistance. What Lorey refers to as “constituent immunisation” is based on “the self-government of the precarious” – a self-government that might enable a disobedient flight away from dominating political structures through the very precarisation to which many of us are subjected.

This is a promising framework for those of us struggling under the current conditions of insecurity and fragmentation in which low-income self-employment is exacerbated by diminishing social services. Lorey encourages us to perceive precarity as a mode of political action that is based on living in disobedience. In her new book State of Insecurity: Government of the Precarious (2015) she convincingly refuses to accept that precarity is solely a threat to social security advising, “if we fail to understand precarization, then we understand neither the politics nor the economy of the present.” Consequently, Lorey uses this text to reassemble and deepen her immersion into her extremely relevant body of research on the precarisation of labour and life under neoliberalism. In doing so, she provides an encouraging characterisation of the figure of the immune, who, through the practice of instituting, the process of forming a social or political group or organisation, is able to rupture the dynamics of subjugation through precarisation.

Lorey’s clear structure strengthens her concepts. She relies heavily on the distinction made by Judith Butler – who pens the foreword – between “precariousness,” relating to the conditions by which bodies survive in a certain way, and “precarity,” pointing to the structural inequality of symbolic and material insecurities. Lorey extends this construct to concentrate on a “third dimension of the precarious”: “governmental precarization.” Supported by Michel Foucault’s concept of governmentality (the control techniques the government uses to govern the conduct of the population, providing society with a feeling of political, economic, and cultural well-being)2 and biopolitics (the strategic coordination and insertion of power relations)3 Lorey describes the complex interactions of a neoliberal instrument of governing that regulates its members through specific conditions of domination and exploitation.

One of her most prescient points is her sharp assessment of how the doctrine of bourgeois sovereignty gave rise to the autonomous subject. In noting sovereignty’s transformation into an instrument of coercion4, she asserts that the free, self-realised, self-governed subject is formed between the paradox of empowerment from one side and subjugation from the other. In other words, by amplifying the state of being perpetually threatened by the dangerous Other, power uses the figure of the sovereign subject who must remain dominant to protect themselves from a state of precarisation. In this sense, precarisation becomes dependent on relations based on processes of Othering, involving a manner of safeguarding that legitimises hierarchical relations of power.

Lorey’s insistence on the governmental construction of the dangerous Other highlights the role of the political culture of danger and the latent contradictions in its function as a mechanism of neoliberal governmentality. As Lorey argues, “in governmental subjectivations, […] the demands of a preventive, individualist self-protection, of self-immunization in precarization, are more affirmed than questioned.” For Lorey, it is crucial to stress how, presently, governmental precarisation is able to regulate through the construction of a certain sense of insecurity that is based on the duality of a normalisation of freedom and insecurity.

Moreover, Lorey claims that governing through precarisation as insecurity has created modes of subjectivation of anxiety that foment individualisation. In the context of neoliberal governmentality, the race for individual security and the nervousness in being exposed to existential vulnerability have slowly but surely overshadowed the possibility of communal solidarity and collective political action.

In spite of this dark cast with respect to the possibilities for collectives forced into precarity, Lorey reminds us that in the process of normalising precarisation, it is also important to consider the consequences of a potential loss of hegemony. Indeed, through a neoliberal process of standardisation and regulation of differences, the modern distinction between the liberal, the post-Fordist worker and the precarious no longer seems possible. Henceforth, the boundary between the normal and the precarised becomes intrinsically blurred.

Within this framework Lorey introduces the practice of the Madrid-based research collective Precarias a la deriva and their militant concept of ciudadanía, “a care community in which our relationality with others is no longer interrupted but is regarded as fundamental.” It is relevant that the Spanish word precarias can be translated in this context as “precarious women workers,” alluding to women that suffer from weak and unstable working conditions. The adverb a la deriva, or the verb derivar, literally translated as “drift to another place,” refers to Precarias’s practice of “interviews in movement” undertaken in their daily environments. By using a personal and affective encounter with other people that shares their same precariousness, Precarias embrace both the singularities and the multiplicity of existence, proposing a common ground of precariousness in which individuals can gather together and yet do not necessitate a clear collective identity.

Concentrating on the care for the common and by recalling Gilles Deleuze and Félix Guattari’s “line of flight” and Paolo Virno’s notion of “exodus,” Lorey uses the last chapter to encourage us to refuse feeling virtuous in a state of servitude. Importantly, Deleuze and Guattari’s line of flight does not propose we flee the world but rather that we act against dominant systems of thought and social conditions. Similarly but not equally, Virno proposes exodus as an organised practical and radical politics of emancipation that does not follow revolutionary models in which the main aim is to take over the state but rather to offer up a “non-state run public sphere” that aims to achieve “radically new forms of democracy.”5 In the face of this logic, and obviating current politics of pure victimisation, Lorey proposes the configuration of a constituent immunisation driven primarily by a “logic of care” and used as “a plane of consistency, a creative line of flight, a smooth place of displacement.”6 A constituent power that neither flies nor runs away from former grounds of domination but returns and reacts against them through “political practices based on the multiplicity of the precarious.”

Lorey’s efforts to dismantle false neoliberal tactics of security in which anxiety and fear animate the logics of governmental precarisation, point to the urgency to create forms of resistance sustained by networks of solidarity capable to break with the individualisation and segmentation produced by post-Fordist working conditions. Nevertheless these are networks of solidarity that can do without a clear collective identity, as it is through the identification of common precarious experiences that the urgency of coming together is raised. In that sense, Lorey’s book amplifies the call to think creatively about new forms of organisation in which the enhancement of care work, and the primacy of becoming-common as political agency, affirm the grounds for precarity to be conceived as activism. In sum, Lorey proposes a fearsome mode of constituting, or act of coming together that, while fleeing or searching for alternatives, invents new forms of immunisation that push up against today’s tyranny of vulnerability and contingency.

2. According to Michel Foucault, “this word [government] must be allowed the very broad meaning it had in the sixteenth century. ‘Government’ did not refer only to political structures or to the management of states; rather, it designated the way in which the conduct of individuals or of groups might be directed – the government of children, of souls, of communities, of the sick. ... To govern, in this sense, is to control the possible field of action of others.” Michel Foucault, Power: Volume 3: Essential Works of Foucault 1954 –1984, ed. James D. Faubion (London: Penguin, 2002), 326.

3.The concept of “biopolitics” is presented for the first time in Foucault’s final chapter in the introductory volume to The History of Sexuality (New York: A Division of Random House, 1978 [1990]). In it, Foucault uses the term biopolitics, or the “art of governance,” to refer to the relationship between power and its insertion in life. By its very definition, biopolitics represents the extension of the economic and political power into the entire social fabric or population in order to extract a surplus of power from living beings. Maurizio Lazzarato furthers the premise of biopolitics in his essay “From Biopower to Biopolitics” included in Foucault: Madness / Sexuality / Biopolitics (Coventry: The Warwick Journal of Philosophy, 2002) as a representation of the emergence of the singularisation of resistances, emphasising the link between power and forms of resistance.

4. “Power,” Foucault declares, “is exercised only over free subjects, and only insofar as they are free.” Michel Foucault quoted in Isabell Lorey, State of Insecurity: Goverment of the Precarious (London: Verso, 2015), 34.

Lara Garcia Diaz is an independent art researcher. Her work focuses on the analyses of practices that challenge the boundaries between art and politics, considering alternative modes of empowerment through radical theories and practices of cultural resistance. Since 2014, she collaborates as an assistant researcher at the Van Abbemuseum, Eindhoven where she formalized her research on Urban Utopias and Spanish modern architecture in one of the rooms of the exhibition Confessions of the Imperfect. 1848 – 1989 – Today (2014–2015). Since 2015 she is extending her research on institutional contexts in collaboration with the Research Centre for Arts in Society, Groningen.

According to Isabell Lorey, it is essential to invent new forms of democracy and to understand how we are specifically governed by a perverse democratic governing system, which encourages increased precarisation. To counter this, Lorey proposes the subversive figure of the immune: constituent immunisation. She postulates that constituent immunisation stresses a renewed ordering in which the safeguarding of the political body is no longer at stake. Instead, we must turn to the constituting of those who were formerly constructed as a threat.