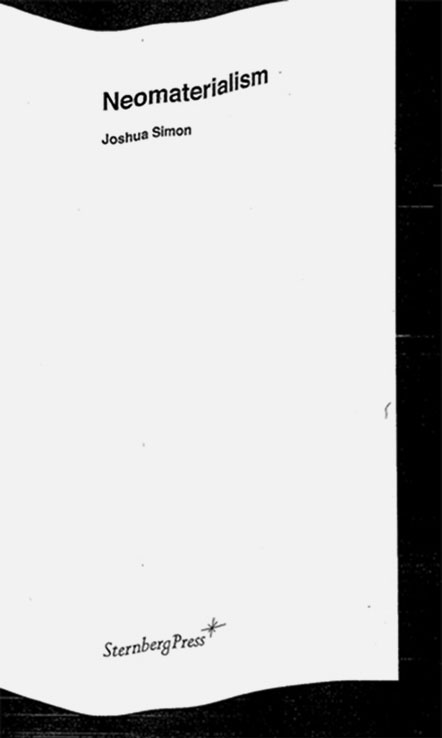 Late last summer in the City of London, light reflecting off the glass curtain wall of a skyscraper caused, in no particular order, a luxury car, a white van and an energy drink to melt. The concave form of architectural firm Rafael Viñoly’s 20 Fenchurch Street building already looked like one of H.G. Wells’s Martian war machines; unloading a heat-ray seemed to take the idea of finance capital as a destructive force to fantastic extremes.1 And with the intense media interest that surrounded the accident, the event represented a new intervention in the debate on urban materialism, a kind of auto-curatorial practice taking place at the level of unconscious objects.

The episode perhaps illustrates the central theme of curator Joshua Simon’s book Neomaterialism. If, as some political economists suggest, contemporary capitalism has moved to an immaterial basis then, Simon argues, this “phase-transition” has affected the way culture gives capital its content and form. In other words, in an age where financial ownership and intellectual property rights structure global values, art and culture have a complex relationship to the way capital is distributed in space and time. Not only is art a kind of currency, not only are museums a realm of pecuniary exchange, but signifying practices have enabled capital to colonise the field of everyday life. In some respects this represents both the realisation and inversion of the avant-garde project. As theorist Sylvère Lotringer says, Dada’s project has been “fulfilled...with a vengeance, embedding art into life”,2 coating the human ensemble of social relations in a substance conducive to commodification.

For media theorists like Clay Shirky this represents an astonishing opportunity. The rise of advanced analytics and social connectivity holds the prospect of a cognitive surplus, a commonwealth of knowledge and interactivity impervious to privatisation. Simon gives us a useful corrective to network fetishism. Working in the tracks of Autonomist theory, Simon highlights strains of contemporary art examining the way the “commons” has become the new frontier of economic exploitation. For Simon, conceptual artists today don’t so much revel in the rapture of commodification, as explore the pathological forms capital takes as it accumulates social relations. In Das Kapital (1876) Karl Marx wrote that “if commodities could speak” they would speak to us in the language of value. What Simon suggests is that in a time when commodities have acquired cognitive capabilities, certain artists are developing apparatuses to decode the gibberish of objects.

Perhaps Simon’s book represents a new form of guide to contemporary art. This is art as diagnostic toolkit, able to decipher the complex threats that lurk within the fixtures and fittings of everyday life. Simon conjures numerous examples. Francesco Finizio’s installations give us access to the nonsense logic of neoliberalism spewing forth arrangements of “sweetened juices, teddy bears, funnels, buckets, masks, tape and aluminium foil”. Guy Ben-Ner hacks an IKEA showroom, laying bare a day in the life of a nuclear family undergoing a slow meltdown. Heather and Ivan Morison’s junk barricades turn New Zealand’s capital into a site that simultaneously revives the memory of the Paris Commune and the earthquake that wrecked Christchurch. Where “readymades” once gave artists the ability to liberate objects trapped in a world of utility, such artworks disclose practices that create readymade subjects; life forms trapped in contracts of debt, cycles of fashion and disaster scenarios.

Simon’s implicit suggestion that neomaterialist art embodies an auto-critique of financialised capitalism is fascinating. But due to Simon’s writing style conceptual acuity is sometimes lost in a pile-up of references that cut off ideas in their prime. At one point, Simon suggests that Robert Smithson’s land art is the progenitor for Dubai’s waterfront urbanism. Later he argues that the self-help dirge The Secret represents a type of neoliberal codex. These propositions deserve whole chapters, but as impish thought-bubbles they read like witty but inconsequential observations which pop on contact with air. Also the discussion of art sometimes gets sidebarred in favour of illustrating theoretical ideas. So while we get reams of exegesis on Maurizio Lazzarato’s notion of the “indebted man”, a block of neomaterialist work is marginalised to a mere footnote. It’s not that Simon’s readings of political economy aren’t interesting, it’s just that they become more vivid when plugged into praxis.

Finally, in a text which delights in theoretical excess, the absence of one cultural theorist – the one, who ultimately underpins Simon’s claims and, in short, made this style of theory possible – seems a little pointed. But as the point is never made clear, we can only speculate that it might have something to do with Marxist political theorist Fredric Jameson’s dyspeptic regard for a figure that Simon rarely subjects to criticism, the curator. Recently Jameson has argued that curatorial practice today is symptomatic of a political shift in the way commodities are produced and consumed.3 For Jameson, the power of the curator is the asymmetrical expression of the waning potency of a collective avant-garde. Similarly, philosopher Peter Sloterdijk has said that curating has become a basic competence “that everyone is obliged to practice”.4 Simon though never brings the relationship between the rise of the “curatorial class” and the generalisation of the “indebted man” into the discussion. Which is surprising given that in the era of immaterial labour, with the emergence of the “prosumer” and the entrepreneur as artist, the curator now functions as a kind of middle-manager in the new division of labour: moderating trends, recognising patterns, identifying properties. Nonetheless, Neomaterialism is a useful marker, signalling that contemporary art hasn’t forgotten that capitalism today weighs like a nightmare on the brains of those struggling to make a living.

Louis Moreno is a lecturer in the Department of Visual Cultures, Goldsmiths, researcher at the UCL Urban Laboratory, University College London and a member of the “Freethought” group convened by Irit Rogoff.

The Italian-French sociologist Maurizio Lazzarato uses Foucault’s concept of ‘pastoral power’ to analyse the demise of the separation between public and private space. Furthermore, his study of the social policies concerning unemployment shows how ‘the production of guilt’ is more and more often being used as a strategy; a process already described by Franz Kafka in his literature.