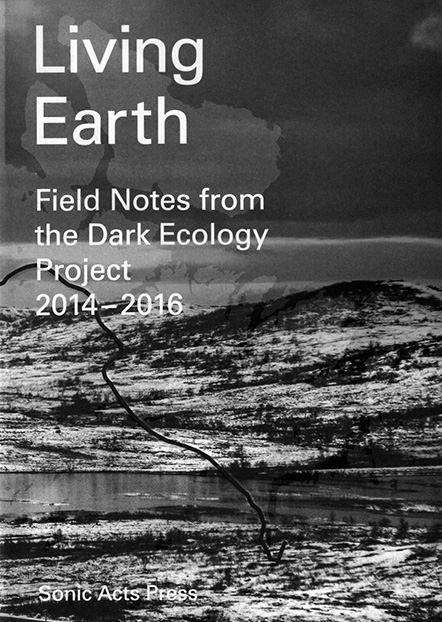 A Living Earth is filled with the sound that you feel behind your ribs before your ears catch up. Sound that’s in the back of your throat before you can say you’ve heard it – darkness chips away a thousand feet below the surface – your alveoli shrink as the (w)hole gets wider and deeper. Plunging downwards, the sound buckles and you are on your knees listening to what happens after the ‘apocalypse.’1 Ore pulses throughout the sheath of rock that folds over your head. Tap the shining lines – blackness, sweat, a seething mass, a wall of sound, bodies – copper, nickel laced with pyrrhotite: metal. Feel a ringing in your molars and in your palms. ‘Something not in your ontic vicinity is exerting causal pressure on you.’2

Such thought supplies the differences which the direct observation lacks. It can even play with inconsistency; and can thus throw light on the consistent, and persistent, elements in experience by comparison with what in imagination is inconsistent with them. The negative judgement is the peak of mentality.3

Alfred North Whitehead is referring to the speculative leap. Having taken flight – ‘in the thin air of imaginative generalisation…’4 – and landed safely back on solid ground, he rationally interprets his findings in praise of the speculative method. Whitehead, who developed a non-anthropocentric philosophy that rejected the bifurcation of nature, and who has proved instrumental in the development of contemporary speculative philosophy, is a familiar place to start. Certainly, contributors to Living Earth: Field Notes from the Dark Ecology Project 2014–2016 are no strangers to Whitehead – namely Timothy Morton who coined the term dark ecology and Graham Harman whose Object Oriented Ontology has been of great influence to many of the works documented within. Both theorists have been influenced and compared to Whitehead with varying degrees of suspicion and success.5 We have to start somewhere. If Whitehead stands behind us yelling ‘Jump!’ – Living Earth opens the darkness into which to leap. And Morton assures us that darkness can in fact be strangely light if we are willing to traverse its loops.

So we begin in ‘darkness as depression’. But think not only of despondency. Think through a lowering of atmospheric pressure – a shifting weather pattern. Joris Strijbos’s weather reactive IsoScopes have been specially engineered for the plummeting temperatures of Kirkeness, Norway. A balloon attached to artist Signe Lidén’s backpack dips slightly with the wind’s perspective as he fires an arrow into the earth, recording each depression. Think alongside Tatjana Gorbachewskaja and Katya Larina through the economic depression of the nickel mining town of Nikel, Russia. And then descend, like Justin Bennett, into the deepest man-made hole on Earth in Murmansk Oblast, Russia. It goes on, thirty-three artists, philosophers, musicians and thinkers, commissioned as part of Sonic Acts’ three-year Dark Ecology art and research project reevaluating our relationship to the environment, hear the speculative philosopher’s call ‘…Jump!’ The result is an engagement with ‘aesthetics as first philosophy’ and acceptance of ‘the disturbing excess of the aesthetic dimension as an intrinsic part of everything in the universe…’6 – a collection of objects and experiences, pictures and sounds ‘…partly opaque or mysterious, as a surplus over and above its perceived qualities.’7 These field notes force us to think across scale – from ‘global weirding’8 to the fine stratification of the smallest anticline in the vast Barents Region, Russia. Start in darkness as depression; the loop of ecological awareness, in which we confront our coexistence with non-human forms deep within.

In a Living Earth, darkness is constant – and light, darkness is strangely light. Darkness floats separating the parts from the whole. The precious metal and the unwanted tailings spread out in the darkness. The poisonous soup is a smearing of trace elements made into a liquid shimmer. Inseparable but distinguishable in their momentary disappearance into the darkness of one another’s shadows. Movement between places cannot be tracked by any single sense, any substance, in isolation. Seeing and hearing and feeling are a conglomerate sense – compatible with the seeping of sound and the shading of darkness as the two haunt one another – paradoxically present and absent as conglomerate weirdness in soupy darkness. Things are exactly as they are, but not exactly as they appear to be as they withdraw, the contextual abyss of explanation is foreclosed by an existence in darkness.

The liquid shimmer is heated and cooled, the shadows of things as things in themselves, float to the surface. Hot and then cold, hot and then cold, as if in a highly irregular elliptical orbit around the burning sun. This is how comets live and die; their sparkling tails are made of melting as they pass too close to the burning stars. The more beautiful the strike, the more damage is done. It loops. Dark ecology starts out as the light that it cannot reflect. ‘It traverses darkness as ontological mystery. It ends as darkness as sweetness.’9

Sarah Jones is an artist, writer and curator. She is a PhD candidate with the University of New South Wales School of Art and Design. She was awarded her MFA from the Dutch Art Institute in 2015. Her practice explores publishing-as-process through the complicated materiality of text-based artworks. See further: www.sarahjones.net.au.