Time in the Age of the Moving Image 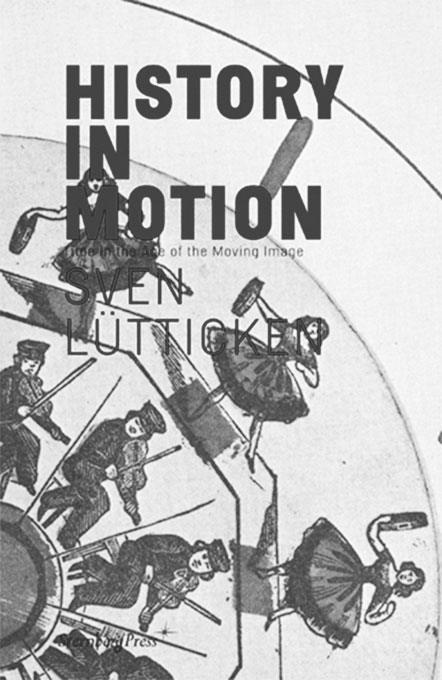 It took me a while to realise that the word “image” contains the word “age”. By way of a Heideggerian hyphemism, “im-age” may indicate the inherent temporal dimension of every visualising act of imagination or imitation (imitare being image’s etymological root) . “Im-age” also points to the biography of the image – its life, its story and its history. Arguably, the hyphenated term could serve as a conceptual acknowledgement of the time and temporality of images and thus add to or complement the contested “Bild-Akt”, image act (promoted by art historian Horst Bredekamp in the wake of W.J.T. Mitchell’s neo-animist proposal to conceive pictures that are considered needy and wanting entities). I’d propose that the aging image, the image that inhabits and produces a temporality, is probably as interesting a conceit as that of the image as agent.

Both “image” and “age” feature in the subtitle of Sven Lütticken’s History in Motion, an ambitious and courageous study about time and art as well as the relations between temporality and performativity. The book’s date of publication is timely (pardon the pun), as interest in things temporal has blossomed in recent years in recent years, particularly in social and cultural theory and in relation to contemporary art. The theme of the temporal can be found in art historian Jonathan Crary’s 24 / 7 (Verso, 2013), which speculates on contemporary time management as systemic sleep deprivation; media scholar Sarah Sharma’s In the Meantime: Temporality and Cultural Politics (Duke University Press, 2014), a study of “the micropolitics of temporal coordination and social control between multiple temporalities”, as well as the anthology Time (Documents on Contemporary Art, MIT Press, 2013), a survey of contemporary art and theory “that proposes a wealth of alternatives to outdated linear models of time”. This is but a sampling of the growing range of approaches to time that features diagnostic assessments of the status quo in art and culture.

However, Lütticken, broad as his spectrum of references may be, appears less interested in the sociological hypotheses of the changes in how we experience time or the ways in which temporal regimes of speed and acceleration have become forces of domination and control (although he does make occasional, effective use of these theories). Instead Lütticken is very interested in the specifics of contemporary art’s engagement with film and video, instances of which are considered to provide alternatives to the compulsion of contemporary societies’ subjects to act as performers of selves forever captured by the temporality of capital.

In the sense of a self-confining strategy, however, this should not to be interpreted as a modest retreat into art history as a specialised and disciplined discourse. The author prefers to lure us into a whirling cross-textual and cross-disciplinary endeavour. His prolific production over the past decade or so, has led to the publication of important books such as Secret Publicity: Essays On Contemporary (2006) and Idols of the Market: Modern Iconoclasm and the Fundamentalist Spectacle (2009), which has earned Lütticken a reputation as one of the most daring leftist critical voices in art discourse. With his lush virtuosity and nuanced opinions, he draws connections between seemingly distant locations on the maps of cultural history and radical theory. His work is driven by a cognitive style that owes a lot to the principles of montage and the syncretic traditionalism and traditional syncretism of the essay. Cogent summaries of his abundantly associative texts are almost impossible. On the other hand, it would be wrong to limit oneself to the admiration of their textural and referential richness, since Lütticken is clearly on a theoretical and political mission.

In particular, he is attempting to reconcile the “temporalizing impulse” of Gilles Deleuze and Félix Guattari’s writings with the historicist project of Hegelian-Marxist dialectics. History in Motion looks at contemporary cultural practitioners and their (largely) cinematographic or videographic work to identify the various strategies employed to avoid or oppose linear-chronological time and the protocols, patterns and programs of our contemporary neoliberal existences. Stressing the antinomy of historical and lived time, Lütticken focuses on his “historical investigation into the temporalization of history as it manifests itself in artistic practices”. This “temporalization” can assume different shapes as well as affect various “transformations” of time. History in Motion is very vigilant of the need to distinguish between practices of cinematic gallery art that are merely nostalgic views of film and cinema’s archival-archaeological past and those that actually run (or amble) the lines of flight out of dominant historicist temporal regimes. The book is not just another survey of film and video installations in the ever expanding field of contemporary art. Instead, Lütticken proposes a normative and therefore selective foray into the complicated relationships between the products and projects of the past and the ways in which these (still) moving, material remainders have become the archival presence-absences that need to be retrieved, reconstructed and revised in the visual-conceptual processes of a contemporaneity that is considered to be “a contested terrain, an asynchronic coexistence of different temporalities, ideologies, and social realities”.

Lütticken takes his cue from the likes of Jean-Luc Godard (for his multiplying of film history via histoire(s) du cinema), Guy Debord (for his critique of the sequential, “commodified” time of capitalism and his insistence on anachronism), and Alfred Hitchcock (for his conflicting temporality of shock and suspense). He organises his arguments and observations around short, interwoven, sometimes meandering readings (or, more precisely, mobilisations) of works by artists such as Wendelien van Oldenborgh, Hito Steyerl, Joseph Cornell, Brion Gysin, Louise Lawler, Barbara Bloom, John Cage, Rod Dickinson, Sean Snyder, Gert Jan Kocken, Harun Farocki, Allan Kaprow, The Otolith Group, Paul Chan, Gerard Byrne and Allan Sekula.

In his discussion of Eran Schaerf and Eva Meyer’s video essay Flashforward (2004), a figure emerges that may very well represent the critical position Lütticken is striving for, or is at least searching for in the artistic practices he considers to be relevant and ready to contest the prevailing modes of control and the “general performance” of neoliberal subjectivity. This can be viewed as an “extra of time”, an actor who, instead of expressing the interiority of a person within the limits of linear biographical-identical time, is freed from the duty of carrying a narrative and thus simply follows post-Cagean instructions to effortlessly cross-over from one voiceover or scene to the next, which is interpellated by the anonymous directions and the camera’s movement. Lütticken considers such an extra (or “supplement”) of time – in contradistinction to a performer bound by the protocols of history and narrative – as something that remains “open to potentialities that are not part of the programs” (of the contemporary neoliberal cultures of “general performance”). In other words, one avoids becoming caught in “roles”. Such a view is clearly informed by Adorno’s negative dialectics of the “nonidentical” (and perhaps less obviously by Giorgio Agamben’s concept of the “whatever”) and the post-war avant-garde art of Cage and Fluxus with its emphasis on the aleatory and the non-linear, which becomes a resource for turning the temporal “programs” of the societies of control into empowering “scores”.

Lütticken remains reluctant to suggest a straightforward “liberation” of time, but seems ready to fight against the pessimism of intelligence with his optimism of will. In other words, he doesn’t give up on a futural thought that may lead beyond the dystopian vision of completely financialised futures; he indeed imagines a futurity that is deeply entangled in the histories of critical theory and late avant-gardism.

Even if it is sometimes difficult to mind-map the numerous threads of Lütticken’s beautiful text, and, despite a lamentable lack of discussions of postcolonial, feminist, queer and other counter- or drag temporalities that have left their marks on recent production, History in Motion is a substantial, provocative and original contribution to the literature that addresses the critical functions of the visual arts in a time of growing concerns over the true age of the image.

Tom Holert is a Berlin-based writer. In 2015, he co-founded the Harun Farocki Institut in Berlin. Holert also conceptualized the exhibition Learning Laboratories, on view at BAK, basis voor actuele kunst in Utrecht, from 2 December 2016 to 5 February 2017.

The need to keep out the big, bad, unsafe world is growing, as evidenced by the increase in enclosed spaces. Using the concept of the ‘human park’ introduced by Peter Sloterdijk in 1999, as well as old and new examples from ﬁlm, architecture, art and television, Sven Lütticken wonders whether the new societal form these places conjure up for us is in fact safer.